Want to read the genuine and unbiased Embark Dog DNA Test Reviews? Here is everything for you. Read this full review post on TheKeenHunter, and you will be able to make a better buying decision.

Want to give your dog a DNA test but heard that dog DNA tests are unreliable? Well, here comes the good news for you and that’s the newest at-home DNA test kit for dogs by Embark which is both reliable and safe.

Embark Dog DNA Test Kit comes with all the recent scientific advancement and provides the most accurate results than any other dog DNA test kits available in the market for identifying the breed and genetic health risks.

What Have We Discovered With One Of Our Dogs Embark DNA Test? | The Genuine  Embark Dog DNA Test Reviews

We, at TheKeenHunter, have bought this test kit several weeks back and have tried this test on our rescue dog, Dazz. Well, previously, we have tried a few other DNA test kits on Dazz, but the result that we got was not satisfying and accurate.

Sharing the previous test kit experience, one of the kits showed that the Dazz is a mixed breed bulldog with no signs of Labrador Retriever. However, for anyone who met our dog Dazzy, he is a lab through and through. Yes, Dazzy is a mixed breed but no Lab at all. Overall, we were damn surprised with the test results of all the Dog DNA Test kits we have tried previously and felt like we have wasted our money on those test kits.

On the other hand, Embark Dog DNA Test Kit gave us a more accurate test result with the majority being labrador retriever, bulldog,  and some minor genes for husky, chow, and golden retriever.

In simpler words, we would have paid for Embark Dog DNA test kit to know Dazzy’s real genetic markup the first time rather than wasting my money on other unreliable and partially accurate dog DNA test kits.

Another surprise with Embark kit was health-related genetic markers that Embark sent us for our dog, Dazzy. According to DNA reading, my dog is not at any genetic health risk. However, Dazzy is a carrier for PRCD Exon 1 (Progressive Rod-Cone Degeneration) and PRA (Progressive Retinal Atrophy).

Well, since we have identified this, it won’t be passed along to the next generation, and we can rest assured that Dazzy will continue to be healthy with no genetic health risks at all.

Here is a quick video by Embark itself on how the DNA test kit actually works and gives results and information.

Overall, if it’s about the accuracy, which actually matters for most, Embark Dog DNA Kit is the winner in our opinion. In other words, it’s good to pay a few more dollars for a test kit which can provide you with the most accurate results along with health concern information than the one that gives partially accurate results.

Our dog, Dazzy, has got 3.1 wolfiness Score. Well, most of the dogs usually get this score around 1% or even less. So, does this mean our dog Dazzy is part’s wolf? Without any doubt – NO. However, it means Dazzy has inherited more wolf genres than other dogs.

Obviously, Embark Dog DNA test kit is available at a slightly more expensive price tag than its competitors, like Wisdom Panel. However, when it comes to accuracy and knowing all possible information and facts about a dog, Embark worth buying. Embark offers the best genetic health screening for dogs than all its competitors. Go for it if the accuracy of the result is more important than anything else to you. It won’t disappoint you with the results at all. 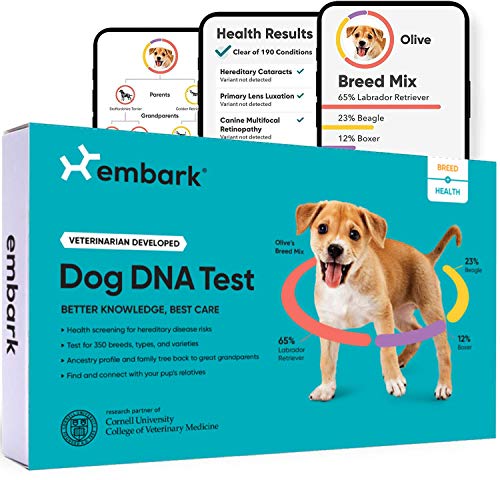 All Up To You Now

So, that’s everything you should know about Embark Dog DNA Test Kit before buying it. We hope this hands-on Embark dog DNA reviews post has provided you with all the information about the kit and helped you in making a smart buying decision.

So, that’s all for now and thanks for reading this post here at TheKeenHunter. We are TheKeenHunter team; we review products with all honest and genuine facts based on our experience.

The Best We Hunted For You

I don’t actually sell anything. I love to help you shop smarter and care a lot about saving a lot. Also, i do my best to make the Keenhunter office a happy place filled with fun activities.